Update: Effective July 1, 2020 through June 30, 2021 the CalFresh time limit rule is waived in all California counties. This means no ABAWDs living in California will have to meet the work requirement to keep receiving CalFresh benefits. ABAWDs who have lost their CalFresh benefits (in counties that implemented ABAWD) may reapply and continue to receive CalFresh if otherwise eligible. 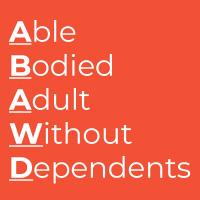 History of this topic:

In December 2019, the federal government published a final rule enacting significant cuts to the Supplemental Nutrition Assistance Program (SNAP, or CalFresh in California). The rule was scheduled to go into effect on April 1, 2020. The intention was for SNAP/CalFresh recipients who met ABAWD criteria to be subject to a 3-month time limit on receiving SNAP/CalFresh during a 36-month time period.

The problem with the ABAWD Time Limit is that this kind of policy makes it more difficult to find work--not less. The time limit denies food aid to:

Denying food help and allowing people to go hungry makes it more difficult to find work, not less. When enacted, this rule would impact basic food assistance for an estimated 700,000 people that were struggling to find work-- a cut of historic proportions. The rule would require almost every California county to enforce the harsh time limit on providing nutrition assistance for adults who are working less than 20 hours each week, no matter how hard they are looking for a job, have irregular schedules, or are employed more than 20 hours a week but unable to document their hours. The federal rule also restricts the state's ability to utilize individual exceptions to provide food assistance to those with the greatest barriers to work.

On January 16, 2020: 14 states including California filed suit against the federal administration.

On March 13, 2020: A Washington DC-based judge ruled to block the ABAWD rule from going into effect nationwide April 1.

On March 18, 2020: The Families First Coronavirus Response Act was signed into law. The legislation grants the USDA and states with temporary authority to adapt SNAP to address increased demand for nutrition assistance during the COVID-19 pandemic. Work requirements for SNAP are temporarily suspended.

On July 15, 2020: FNS approved California's statewide ABAWD time-limit waiver request. This means that no county in California will have to implement the ABAWD time-limit rule until June 30th, 2021, or until the date at which the new waiver standards become effective under the new Final Rule. CDSS also published guidance and further details on August 20, 2020.

On October 18, 2020: A federal judge in the District of Columbia struck down the ABAWD rule. You can read a joint statement by the Western Center on Law and Poverty, the Impact Fund, and Pillsbury here.

If the rule were implemented, the nation would see higher rates of hunger and poverty. The final rule would cause serious harm to individuals, communities, and the nation while doing nothing to improve the health and employment of those impacted by the rule. In addition, the rule would harm the economy, grocery retailers, agricultural producers, and communities by reducing the amount of SNAP dollars available to spur local economic activity.

Contrary to the USDA’s rationale, in reality, this rule does not promote self-sufficiency, wellbeing, or economic mobility. Rather it targets our community members – like veterans and the formerly incarcerated – with the greatest barriers to work by making these individuals hungrier and poorer. It also places an impossible burden on food banks and other emergency food providers to fill in where government falls short.

To quote Andrew Cheyne, director of government affairs for the California Association of Food Banks, "...it’s grounded in the myth that people receiving food assistance are 'lazy' and don’t want to work. Nothing could be further from the truth: the people impacted by this rule have been systematically disenfranchised and face real barriers to maintaining and documenting full time employment. Taking away basic food assistance only makes people hungry, and does not help anyone find a job.”

History of Time Limits on SNAP

In 1996, when Congress enacted time limits on SNAP (then called food stamps) for certain adults who were unable to document sufficient hours of work each month, Congress provided that states could request, from USDA, waivers on the time limits for areas with too few jobs. The area waivers are important safety valves for protecting food assistance for persons who are seeking but unable to find sufficient hours of work. In the decades since, U.S. Department of Agriculture (USDA) has followed the decision of Congress and processed area waiver requests, across the political spectrum, based on accepted economic factors and metrics.

The administration has now narrowed states’ ability to waive the time limit in many areas with insufficient jobs. This action flies in the face of congressional intent, coming almost a year after Congress passed the Farm Bill that left the current area waiver provisions in place. Congress deliberated for two years, with a significant debate about the role of SNAP in helping both working and out-of-work Americans prevent hunger and maintain employment or prepare to re-enter the workforce. The Farm Bill that passed in 2018, with historic bipartisan support, rejected cutting access to the program. The finalizing and publication of this rule follows numerous similar attempts over the past two years to circumvent Congressional decision-making with proposed policies that seek to make it increasingly difficult for low-income Americans to receive the support they need.

More resources on this topic